Or “paneversary”, if you will.

My starter turns 1 today. I caught it in my kitchen. I don’t reference it by name much, but it’s “René”. René Auberjonois passed away in December 2019, so he was on my mind, and Odo sleeps in a bucket. Descartes’ amorphous wax was also on my mind. END_OF_DOCUMENT_TOKEN_TO_BE_REPLACED

A very nice Kenyan coffee from Tim Wendelboe. Finished this up last week; it was definitely a bit past roast and a bit past fresh crop. Tasting notes are right on; anytime I get blackberry/blackcurrant out of an SL-28 I call that a win. Quite sweet, rather flat, mild but enjoyable over all.

Missing those intense blackberry & tomato-stem SL-28s, haven’t had one of those in a while. I am very optimistic about the Ruiru 11 blends I’ve tasted the last few years.

Oh yeah, it’s time to do one of these.  I decided to do my wrap-up here on my personal blog this year; you can see 2019 & 2018 on Positron. Probably some older ones buried in there too.

In theory, I should have read & written a lot more in 2020 than usual for me; but, as so many of us are acknowledging, it turns out that free time that’s directly connected to global pandemics, in the shadow of fascism and climate apocalypse, is not actually the best, most productive kind of free time. It took me until the early part of the fall to recover something like some good reading patterns—even though I wasn’t working an often emotionally/physically draining 50ish hours a week, I also didn’t have the rigorous schedules and windows of reading opportunities that enforced.

Trying to commit to blogging more often, and gonna cheat with some of these! I spend way too much time doom-scrolling, here’s some of the most interesting things from the last week or so: 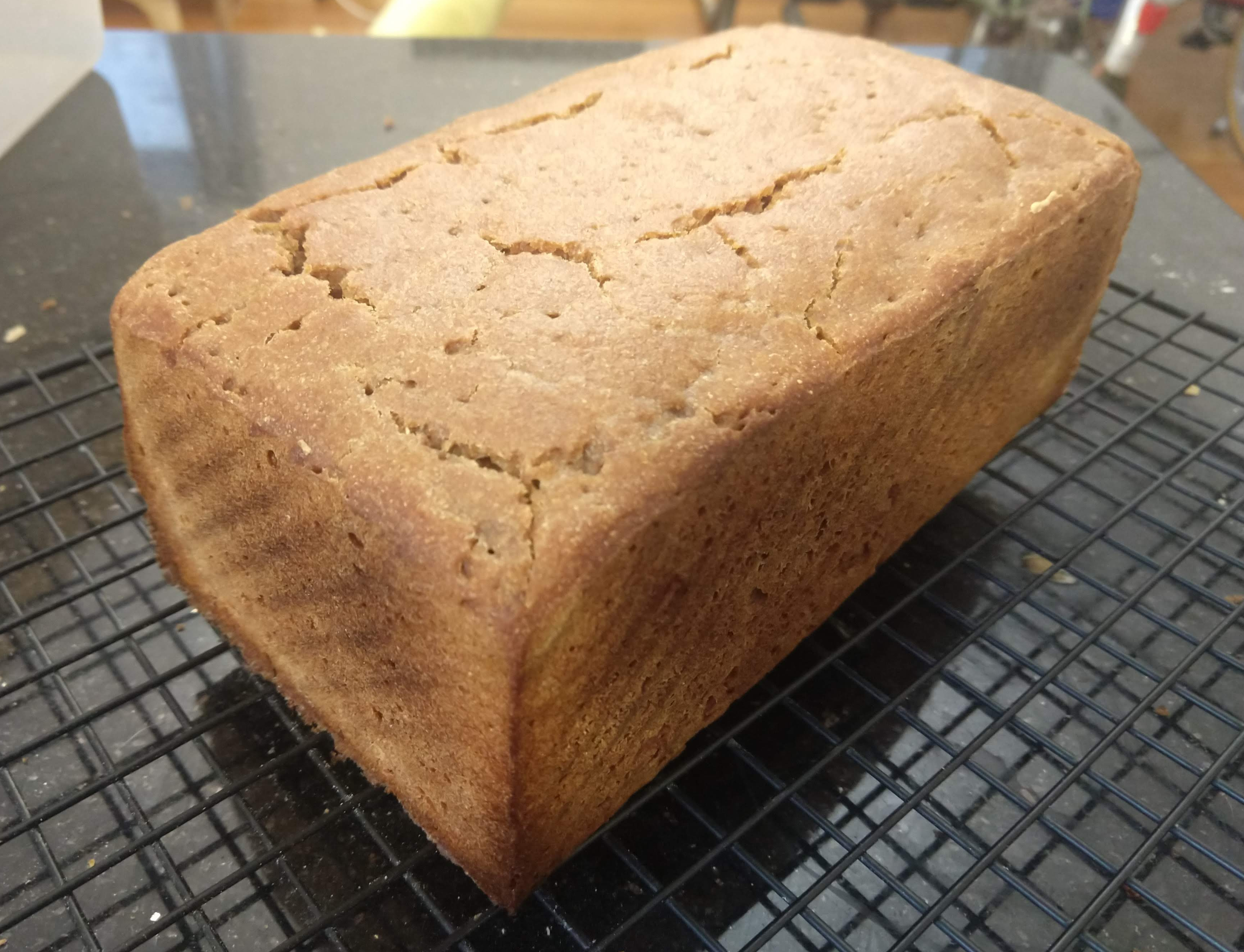 This year included far more baking than I had anticipated. This rye has become a staple for our house; I almost always have a bit around. I kind of cobbled together and adjusted the recipe out of a few different ones. I really love this bread because it’s really forgiving and flexible on the prep side, keeps incredibly well once baked, and is really flavorful/versatile for meals and snacks. END_OF_DOCUMENT_TOKEN_TO_BE_REPLACED

I am really enjoying Vo’s novellas: I did a quick review of The Empress of Salt and Fortune at Positron, and the Chicago Review of Books just published my review of her latest, When The Tiger Came Down The Mountain.

We’ve also got these on the Think Galactic reading list for March, looking forward to that discussion.

It might be a bit cliché, but it’s true: every time I re-read Tolkien, I get something a little different out of the experience. I read The Silmarillion early in the pandemic, and just finished up The Lord of The Rings this week—I’d been reading the latter very slowly, a chapter-a-day comfort read in between other things. 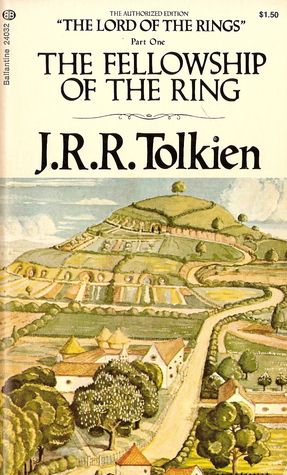 Some observations, in no particular order, and of no necessarily ground-shaking import:

Land history and dispossession:
This is one that’s crept up on me a lot over the last couple re-reads. I think I actually haven’t read LOTR in a couple years, so hadn’t got to the Púkel-men since I’ve had that thought.

With the caveat that Tolkien’s worldbuilding vey much supports “we’re all immigrants” from a deep-time perspective—in any given of his eras, people are moving around, often fleeing some shadow or trouble and moving to new land—it’s remarkable how much there is to grab onto here in terms of land originalism and displacement. The actual text is littered with clues that a lot of the anti-Númenórean (and by extension, anti-Elf) attitudes in the world are well-deserved, that Númenor enslaved and displaced and left a long legacy of resentment. By no means do I think Tolkien was unaware of this angle, but it’s quiet, and I wonder how much of his basing the Good, Western Tall Guys on Britain etc. just kind of entails that “yeah, they’re great so they’ll build empires and do some bad shit by the by.”

Ghân-buri-Ghân is a weird mashup of stereotypes of “primitive” peoples, would probably be more offensive if it weren’t so broad; what strikes me more is just that he’s included, this Noble Savage with strange echoes of African & Pacific peoples, right in the middle of the EXTREMELEY ANGLOPHILIC ride of the Rohirrim. Right when the text itself getting the most Olde English Horny it ever does—which is saying something—with the narrator and Theoden’s speeches increasingly mimicking Beowulfian rhythms and devices, here pops up this living reminder of another people, who were there first. It’s a weird moment, and, like Bombadil and many other Tolkien asides, it’s easy to imagine a modern editor saying “hey, maybe cut this?”—but it leaves in this rich weirdness.

END_OF_DOCUMENT_TOKEN_TO_BE_REPLACED

The Ancillary Review of Books, a very cool new outlet for reviews, criticism, and scholarship, published an essay of mine: “Patterns, Guts: Style and Substance in This Is How You Lose The Time War“.

Books one hates are easy to write about. Books that are troubling are often satisfying to write about: gives one a chance to think them through. Books that sweep me away, that I’ve fallen head over heels for, are by far the hardest to write about; it just takes a long time to be able to say anything coherent about them beyond “this good, you read!” It was nice to try to move beyond that in this essay.

Got some nice buzz and feedback on this, too—both authors responded on Twitter, with Max Gladstone giving me some unintended heraldry and Amal El-Mohtar sending me blushing with a wonderful review-of-a-review.

I’m serious about that annotated version, by the way, and my own copy would probably make an okay jumping-off point: 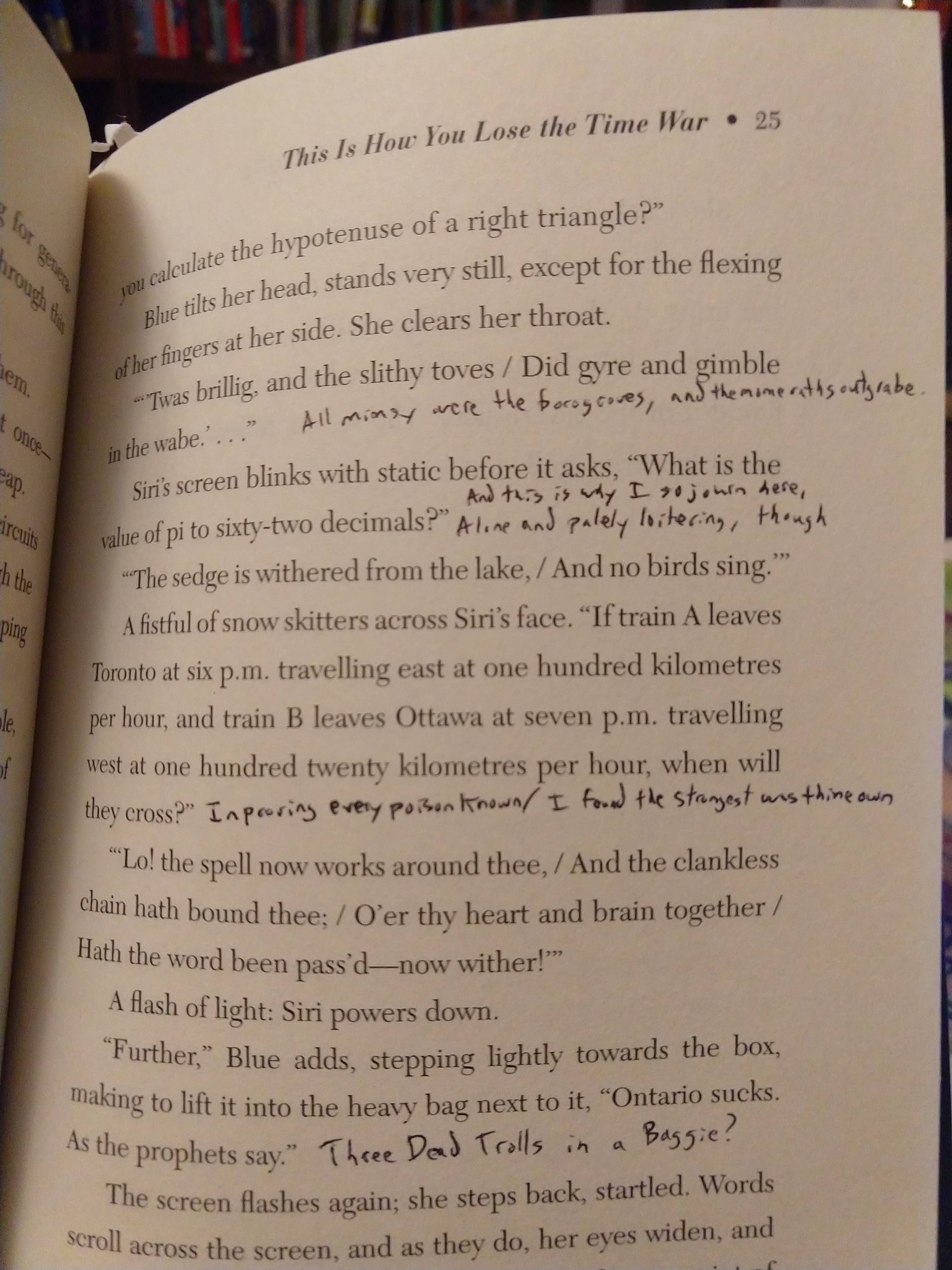 I was 16 when this album came out, the internet was new and exciting, and They Might Be Giants—of course!—were the first band to release an album in DIGITAL ONLY FORMAT, and it blew my little dial-up mind. This was, and I cannot overstate this, the future, and I immediately burned it onto a crappy CRW. END_OF_DOCUMENT_TOKEN_TO_BE_REPLACED

When I sum up the last 3 months, it seems like I was traveling a lot, particularly for this time of Travel Not Indicated. Did not feel that way in person, I assure you; our household’s at a pretty serious lockdown level, masked mileage notwithstanding.

Alison & I & Tiptree went on an anniversary camping trip to the north shore of Lake Superior. I’ve never been up there before; really beautiful country, can’t wait to go back. We were dodging some rain, and were a bit past peak foliage, but it was incredibly nice country to hike through. Decent elevation changes, lots of interesting rocky rivers. Went hunting for agates, found a couple. Maybe? 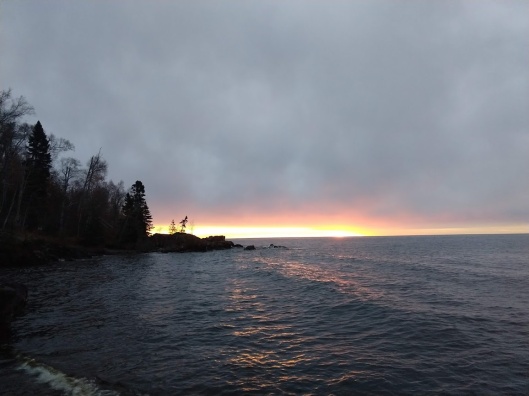